Home » A Weekend Break in Vienna: A Travel Guide

Vienna, what a beautiful city! I love taking weekend trips to Europe from the UK – it’s just so easy to hop on a flight and be somewhere completely different in two hours. I’m talking different food, different culture, different language and difference landscape. My most recent European weekend getaway was a weekend break in Vienna, a city that’s known for its opera and beautiful architecture. Vienna makes for a perfect weekend getaway as well because it’s easy to get around, not too busy and the architecture is stunning so no matter where you look in the city centre, it’s going to be a delight.

The flight to Vienna is a little over 2 hours from London and from the airport to the city centre, it’s a short 30-minute taxi ride into the city centre (the 1st district). My friend and fellow blogger Mona arrived to sunlight and good weather in Vienna which was absolutely divine. We checked into the Ruby Lissi which is in the first district right in the city centre. The hotel’s location is so good and is within walking distance of everything. I love the Ruby Hotels group and have visited two locations as media guest (I also stayed at the Ruby Lucy London location) so it was a bit like coming home. Our room was full of natural light and had a nice big king-sized bed that was so comfy – sleep is so important when you are travelling. Location is also key when you are on a weekend break in Vienna because you can walk to most places.

I love exploring new cities as well so our first stop was to head to St. Stephen’s Cathedral which is was just down the road from Ruby Lissi. St. Stephen’s Cathedral is a beautiful Catholic Church that has a 68.3-meter-tall north tower. It is the second-biggest free-swinging chimed church bell in Europe. From St. Stephan’s Cathedral you can hop into a horse-drawn carriage for a trot around the city or stop in Manner where you must buy the famous Viennese Neapolitan biscuits. Stock up because they are addictive!

One tip? I definitely recommend visiting St. Stephan’s during the day and again during the evening. At night there are candles and the ambience is completely different so it’s nice to see both atmospheres. Once we had our fill of the cathedral, we went out to search for food. With nothing particular in mind, we ended up in a place called Restaurant Morris which was full of locals playing cards. We even saw an old man snoozing away for an afternoon nap so if you are looking for some character and light snack/coffee pick-me-up then definitely swing by.

For dinner we met up with some friends who were local and went to Elissar in the city centre which is a Lebanese restaurant. Despite being a Lebanese restaurant we were told they have some of the best chicken schnitzel in town and also serve the traditional Viennese drink of the Hugo cocktail which is prosecco and rosemary – so refreshing. I ordered the jumbo shrimp which I also highly recommend!

In terms of sightseeing for a weekend break in Vienna, one thing you will definitely want to add to your list whilst in Vienna is do a hop on/hop off bus. It’s the best way to see everything in 1 or 2 days and I like listening to the audio recording which explains all the history. And trust me when I say there’s so much to know about Vienna in terms of history! We used Big Bus Vienna which was great as you could do various routes and a day pass costs £23/€26 so not too bad for a full day of activity.

In terms of sights to see on a weekend break in Vienna I definitely recommend popping by the Vienna State Opera which is a stunning building to see. The architecture is Renaissance Revival and inside there are 1,709 seats! It’s also a good Instagram photo spot in Vienna if that’s up your alley.

The Museum Quarter is also worth seeing in Vienna and it’s a major point on the hop on/hop off bus route. There you can see Baroque-style buildings and you can visit some of the museums there such as the Leopold Museum or the MUMOK (Museum of Modern Art Ludwig Foundation Vienna). 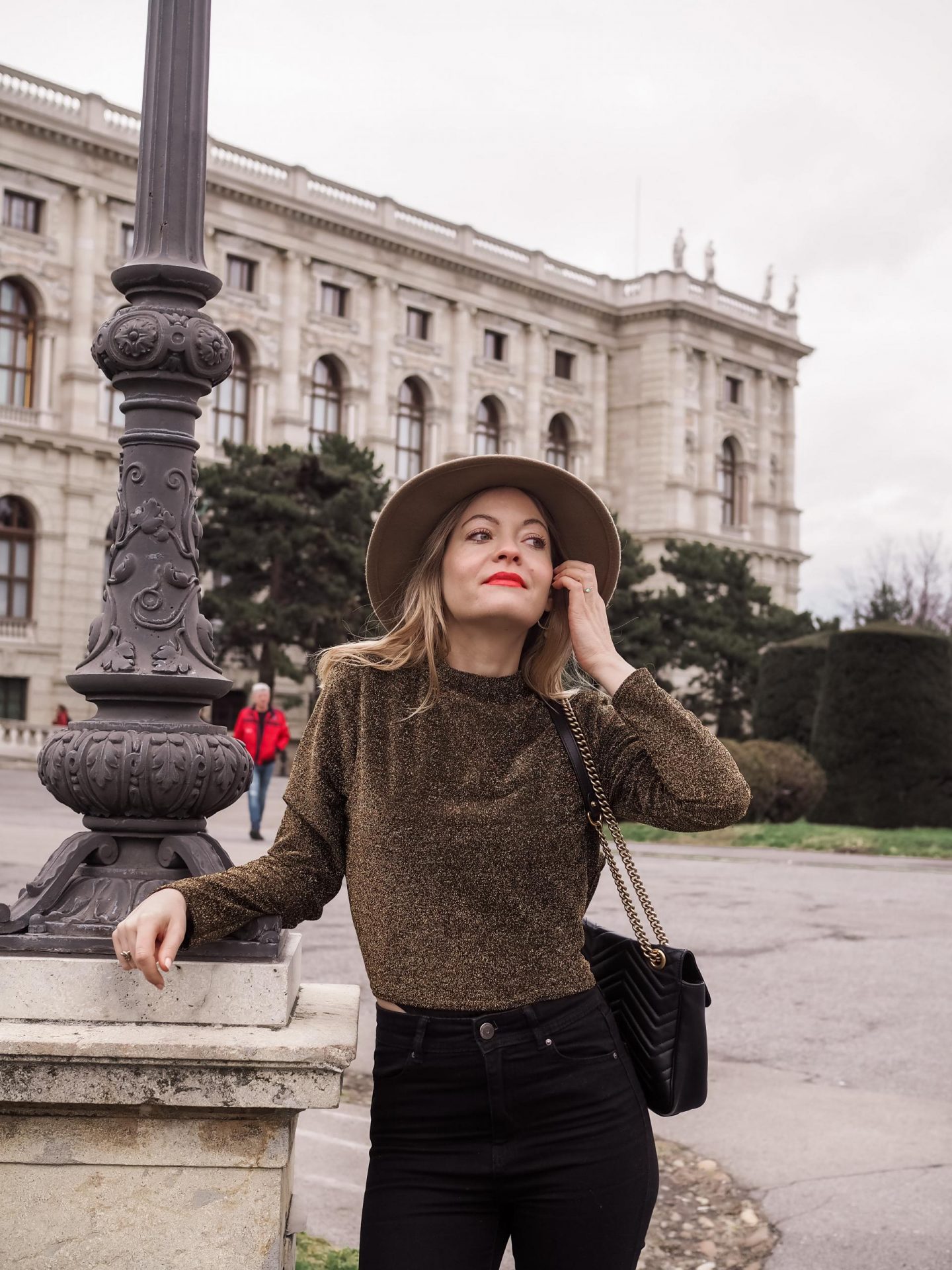 If you are into palaces then another beautiful spot to see is the Belvedere Palace which is certainly a beautiful place to see on your weekend break in Vienna. The Belvedere in Vienna is also one of the leading museums worldwide. Its famous art collection includes works ranging from the Middle Ages to the present day.

Another great thing we saw on the Big Bus Vienna hop on/hop off tour was the Danube River. It’s Europe’s second longest river and flows through 10 countries. If you have heard Strauss ‘Blue Danube’ this is the river he’s referring to in the title.

On our last night in Vienna we headed to Hard Rock Vienna at their invitation which was just around the corner from the Ruby Lissi hotel. The staff were so friendly and welcoming to us with prosecco to start so it was definitely a good time. We took no time at all delving into our starter of beetroot salad with goat cheese, spinach and pumpkin seeds followed by the mains of shrimp fajitas and steak salad. The Hard Rock Café has always been so good to us and if you are on a family holiday the kids will love it as well (although I saw plenty of couples too). And not to forget the chocolate fudge brownie for dessert.

On our last day we had breakfast at Ruby Lissi which was fresh and healthy (with locally sourced ingredients where they can) indulging in some eggs from local farms and fresh bread from the local bakery. It was time to check out and say goodbye to Vienna but who knows when I might be back again?

And one last thing…make sure to stop at Aida for a coffee at the Vienna airport before you go. Everything is in marble and pink!

If you want to read about more of my latest travel adventures make sure to give them a read!

*I stayed at Ruby Lissi on a media invite but all reviews and opinions are my own, as always